In 2018, Harry Foster received a Study Award for excellence in VCE VET Information, Digital Media and Technology. Harry was taught by Mr Domenic Fera, earning a perfect score of 50 for this subject. 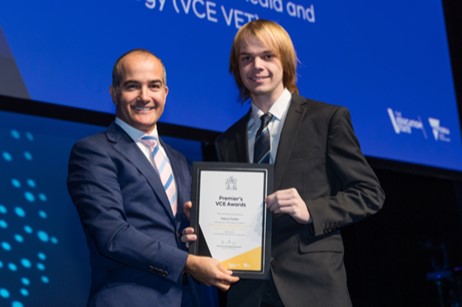 The annual Premier’s VCE Awards recognise the top-performing students in the state with 290 awards presented this year for exceptional results. The Awards Ceremony was held on Monday 3 June at the Melbourne Convention and Exhibition Centre. Mr Guido Piotti, Mr Dom Fera and I were fortunate to be there among more than 1,000 guests. The entire St Joseph’s College community is proud of Harry and would like to congratulate him on being the recipient of such a prestigious award. Harry is pictured above receiving his award from James Merlino, Deputy Premier, Minister for Education and State Member for Monbulk. Harry is currently studying a Double Degree at Monash University –
Science/Computer Science.

Reconciliation Week gave the College the opportunity to stop and recognise the issues brought to light during this important time. The inaugural Indigenous Senior Football Game was held and, although Mazenod College outplayed us on the evening, it was a great game where the students came together at Full Time to link arms in solidarity with our Indigenous brothers and sisters.

Before the match, former students, Jaidyn Stephenson (Collingwood FC) and Ben Cavarra (Western Bulldogs FC), presented the players with the Indigenous Football Jumpers. The jumper’s design was based on a painting by Robyn Davis whose original painting hangs in the College’s Main Reception Area.

Woolworths Earn and Learn
With only a couple of weeks remaining in the competition, please keep sending your stickers along to school with your son and ask him to hand in to his Homeroom Teacher or Student Reception.

All the best for the fortnight ahead.